Slide Show of Before & After Photos 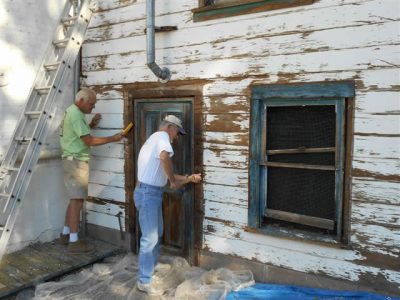 The school opened in 1871 replacing the original school which operated from 1856 until it was destroyed by an arson fire in 1870.  The following news articles describe a “grand pic-nic” held at the original school and the racially motivated discontent which lead to the arson fire, leaving over 250 Sutter Creek children without a school.

Pic-nic at Sutter – We acknowledge the receipt of an invitation to attend a grand pic-nic to be given by the public school at Sutter Creek to-day.  A good time is anticipated, and a cordial invitation is extended to the friends of the school.  We learn that it was the intention to have the pic-nic take place last Saturday, but an attempt was made by some of the disciples of the fifteenth amendment to force a lot of negro children into the procession, whereupon the white participants, who did not feel disposed to yield to the miscegenation yoke of Ulysis the first, refused t take part in the exercises.

School Pic-nic at Sutter – We have received a communication from Sutter Creek, signed “A Trustee,” giving a flowing account of a grand school pic-nic given by the white school children of that place last Saturday, but owing to a want of space, we are compelled to give a brief synopsis of the letter. – He says there were between four and five hundred persons on the ground, and that the exercises were highly satisfactory to the parents, and reflected much credit upon the teacher and children.  He says all the children did exceedingly well, but makes special mention of Miss Fournier, Masters Raymond Brees, Fred Clough, Walter Scott and Isaac Marks.  He also represents the school as being a flourishing condition, all of which we are pleased to learn. 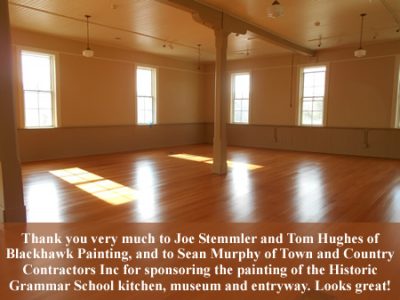 Construction of the west wing was completed in less than one year, on land donated by the Wildman Mining Company.  In the mid-1890’s the east wing was added, consisting of four new classrooms.  By the early 1900’s as many as 350 children from as far away as Plymouth and Latrobe attended the school. The school was fully operational until 1956, serving children from grades 1 through 8.

The school remained vacant until 1985 when it reopened as a community center following an extensive restoration by the Sutter Creek Women’s Club. The school once again fell into a state of disrepair after it was vacated in the early 2010’s.  The City of Sutter Creek currently has a 30 year no-cost lease from the Amador County Unified School District to oversee another round of restoration and improvements.

The Sutter Creek Community Benefit Foundation (SCCBF) is responsible for raising the funds and coordinating the renovation project. Just as with the original 1871 building project the present renovations depend upon private donations and rely heavily upon volunteer labor. To date the SCCBF has raised over $200,000 in private donations to fund the project. Extensive restorations have been completed and the school is currently available for public use through the City of Sutter Creek. When completed, the building will serve as a center for the preservation and display of our local history and will be available to the public for meetings, events and other special activities.

Donors may participate in the renovation of the stairs, windows, doors and other projects through sponsorships and cash donations (click “donate” below).

Donations may also be mailed to SCCBF, PO Box 24, Sutter Creek, CA 95685 with a note designating your specific interest.

Volunteer labor and materials will be welcomed when the project is under way.

You can be a part of Sutter Creek history! If you or a loved one attended the school and have photos, stories, or names of other students, you are invited to share them with us.

A charming balance of old and new, today’s Sutter Creek maintains its Gold Rush facade while catering to the wants and needs of visitors from around the world. Shop, dine, slumber, stroll, wine taste, and enjoy the atmosphere of Sutter Creek in California’s Amador County.